Here is short version in english, for the foreign friends and future puppy owners.

So, Fisu will be mated in her next heat with handsome swedish sheepdog Fyhr's Mio. We wait Fisu's heat to begin in November 2018. This litter will be registered to kennel Tending. The puppies will hopefully be born at my home in Helsinki.


Fisu is maybe one of the most popular border collie bitches in Finland. She competes in four different sports: obedience, agility, tracking and herding. Fisu is Finnish and Norwegian Obedience champion, she has been member of Finnish national team in obedience two times, 2017 and 2018. She won gold medal in Obedience Nordic Championships 2017 and got silver in Finnish Championships 2018. In agility Fisu competes in highest class, she is Finnis Agility and Jumping champion and she has been competing at World Agility Open 2017. Fisu is the winner of Finnish Championships of tracking 2018 and was a member of Finnish National team in Nordic Championships of working trials (NOM) 2018. In herding Fisu has passed Finnish sheepdog trial and she is allowed to compete in highest class also in herding. Fisu has trained herding with sheep and cattle.

In obedience Fisu has always been a nice dog to train with. She concentrates well on training and she does not get easily distracted. She is fast, intensive and powerfull in everything she does. Fisu is a queit worker, she does not squeak or whine at all. Fisu is rather tough and strong towards handler, she takes corrections well, she wants to please and do the right thing but she does not get stressed even when she does mistakes and I need to tell her "no". She is hardworking bitch, she does not give up and she can handle lot of training without getting tired. She does not use "eye" in obedience (or agility) and she is easy to reward. Fisu loves to play with toys and she is very greedy for food. Still there is no problem for her to train or compete without rewarding. Fisu has a perfect on-off -buttom, she is very cool and relaxed while nothing happens, for example at agility or herding trainings I can keep her off the leash, she just lies and is perfectly calm. When it's her turn to go, she is full of energy and always ready to work.

In agility Fisu is a natural talent. She is fast, but not stupid. She works with perfect drive: she is keen but not crazy. She has never injured and she looks very carefully where she goes. She learned the obstacles very quickly and does not need much of repetition to learn something new. She is talented with her body, she does not drop lot of bars and she can turn very tightly.

With sheep Fisu has been an easy dog to train and compete. She got interested about sheep when she was 3,5 months old. She can handle quite a lot of pressure from handler, and she never gets stressed or stops working. She does not use very much eye, she rather runs than gets sticky. She is obedient and wants to listen, but still does not lose contact with the sheep.

In her general character Fisu is energetic but still very stable. She has always been an easy dog to live with, she is calm at home and mostly just sleeps in my bed or wants to cuddle on a couch. She has very good nerves, she can relax perfectly well everywhere, for example at the airport, hotels, trains, ferry etc. Fisu is social to people and other dogs. As negative things, Fisu has a bit of sharpness (tendency to react with aggression if she thinks she is threatened) in her. She can for example bark or lift her hair up if she get surprised or sees something scary, but she has never done anything else than just barked or growled in that kind of situations. She has also some noises she reacts on. She does not like thunder, but she can still train, eat and play despite of thunder. On other loud noises, like gun shots or traffic she does not react.

Fisu has been perfectly healthy all her life, even from the critical aspect of her vet-owner. She has her hips, elbows and whole spine officially x-rayed with perfect results: hips A/A, elbows 0/0, no transversal lumbosacral vertebraes or spondylosis in the spine. Her knees are also officially checked: 0/0. Her shoulders has been x-rayed two times, no signs of OCD. Her eyes has been checked three times, always healthy and also gonioscopy is done with healthy results. She has never had any of common dog's diseases: no otitis, no eye infections, no urinary tract infections, no anal problems, no claw problems. She can eat anything, she barely never gets diarrhea or vomiting, she does not have any allergies or intolerances. Even when Fisu is completely healthy, her puppies may have a risk for shoulder OCD. Fisu's brother Roima has OCD operated in his left shoulder. There is also some other OCD cases in her half-siblings from father's side. Otherwise Fisu's family has been healthy and long-life dogs.


Mio is a three-year-old energetic and clear headed male. He has been competing in herding with good results: he passed Swedish and Norwegian sheepdog tests at early age, he has some very nice placements with good points at nursery trials in both Sweden and Norway, and soon Mio will be competing in Nordic Nursery trials. He has lot of feeling for the sheep and he can work for hours without giving up. Mio has a lot of will to please, he really wants to do right thing, but he can still handle a lot of pressure from handler. Mio has both speed and brains, he can run fast but he is still able to listen and look where he steps.

In every day life Mio is nice and easy dog. He likes to play with toys and he is social to all people. He has good body language with other dogs, and he plays very nicely even with young puppies and cats. He does not react to loud noises and he does not have any sharpness in him. Mio does not care a lot of different enviroments, he has no problems to calm down in strange places.

Mio is healthy and well structured male. He has A hips, 0 elbows and eyes checked couple of times as free from hereditary eye diseases. Mio is from a big litter, and all his siblings that are x-rayed, are healthy. Mio has two previous litters, first Mio-puppies are already 1,5 years old and at least one of them is already x-rayed with healthy results. None of Mio's siblings, half-siblings from mother's side or his offspring has OCD.

Mio has a very interesting pedigree with good herding dogs but also some dogs that have very nice offspring or siblings in agility and obedience. Mio's full brother Robin has results for Norwegian obedience champion (only dog show result is missing) and Mio's other brother Pipu is Norwegian Jumping champion. From mothers side, Mio's aunt Tikka has been a member of Finnish national team in obedience for two years. Mio's uncle Rozz has represented Sweden in agility World Championships and European Open for couple of times. Mio's young son Shepherdseyes Dino has already started his career in obedience at the age of 10 months, with good results.
klo lokakuuta 29, 2018 Ei kommentteja: 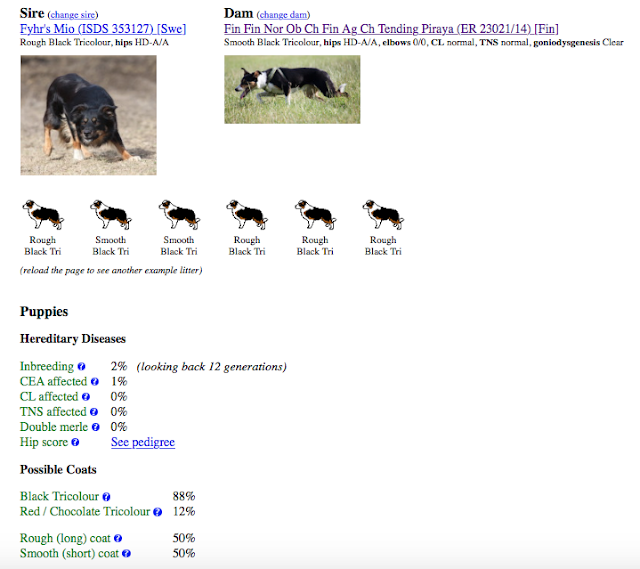 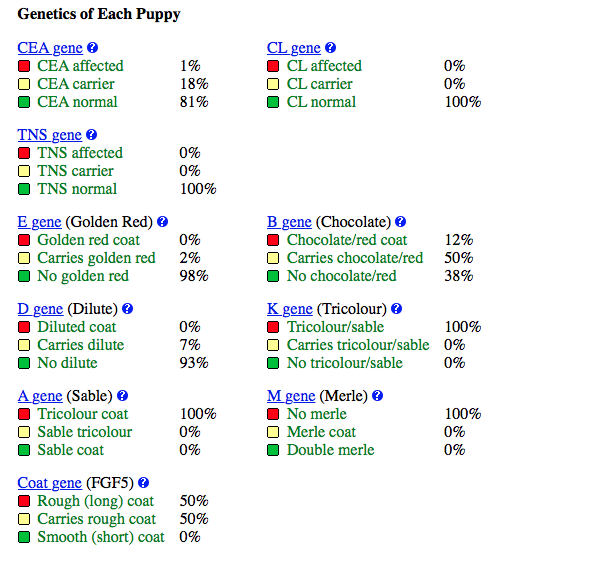 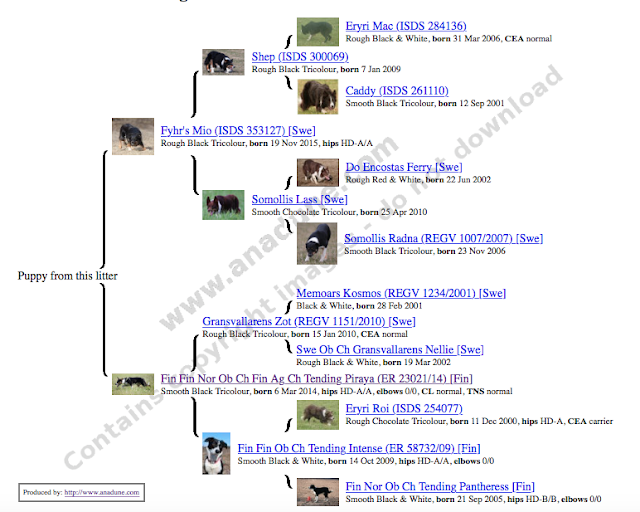 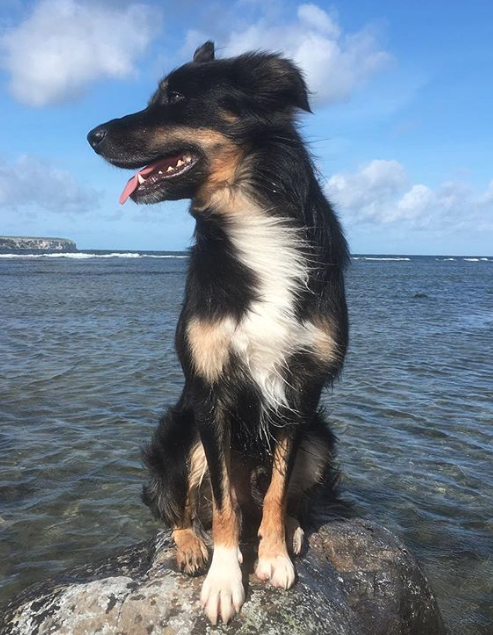 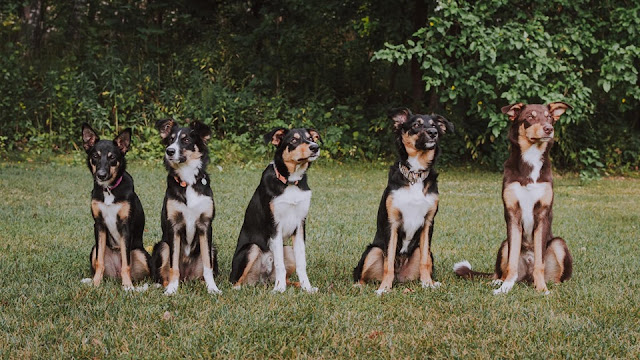